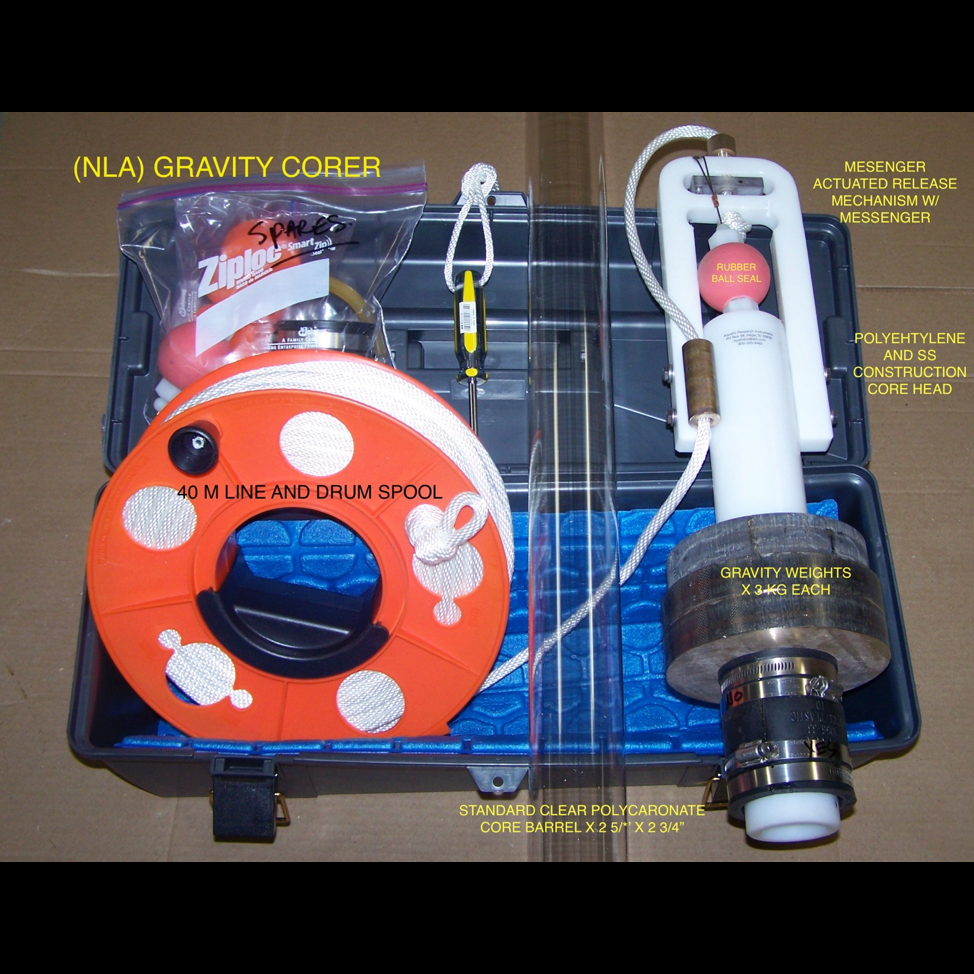 About Our Gravity NLA Corer 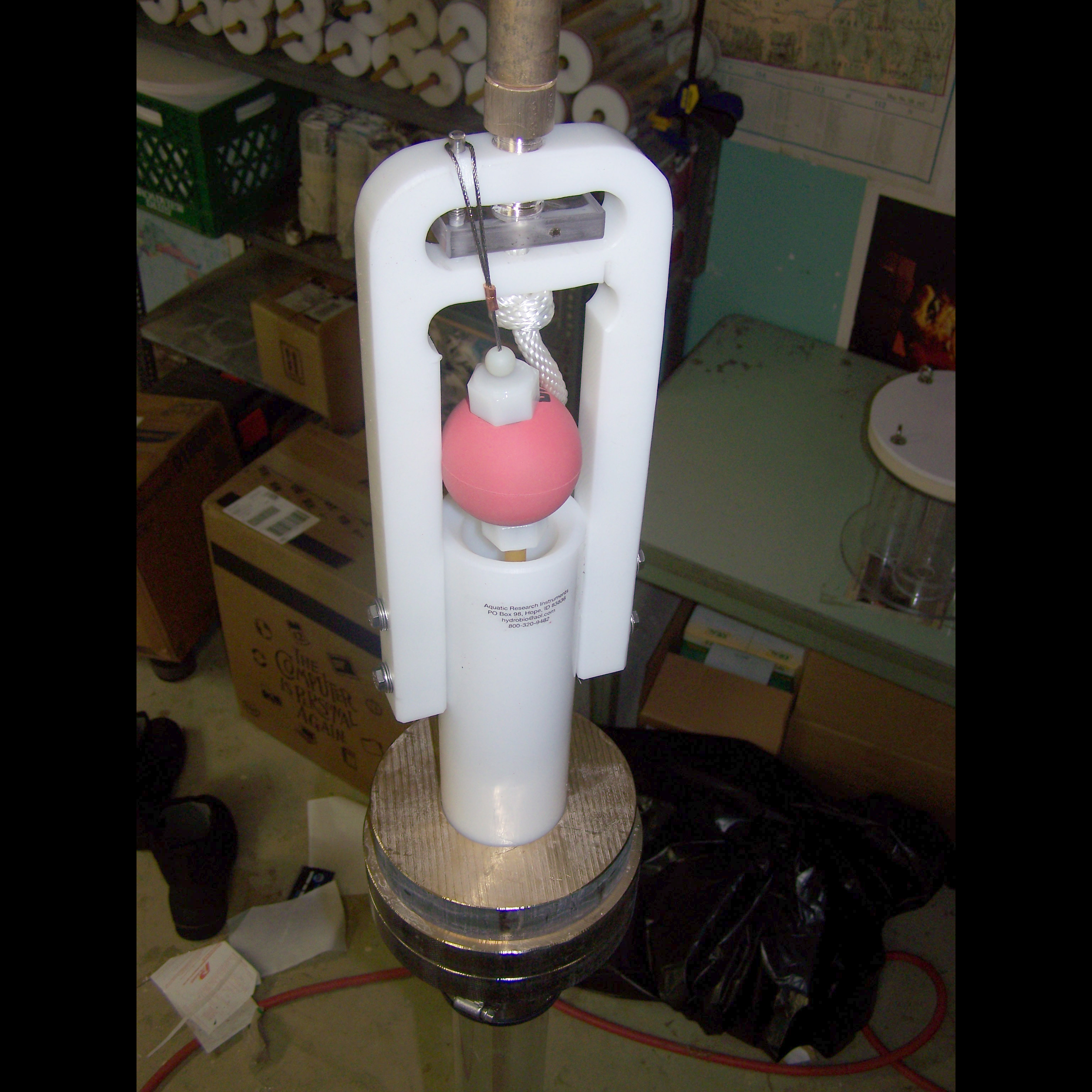 Sample disturbance and compression are minimized by the thin-walled, free flushing core barrels. Ball-type seal held in the open position during deployment, which ensures good flushing. Sediments are retained in the core barrel by a vacuum created by an excellent ball seal, not core-catchers.

Upon retrieval, one must plug the bottom of the core tube before breaking the air-water interface (with core extruding plug or poly end cap) to prevent loss of sample. Clear polycarbonate core barrel material readily available at most plastic distributors.

Core extruding plugs allow one to incrementally extrude sediments upward with aid of a Core Extruding Apparatus. Core barrels can easily be drilled/plugged (for pore water extraction), serrated, cut and split to meet the special needs of the investigation.

(BEFORE YOU DEPLOY THE SAMPLER) A Messenger threaded on the line and nested inside the line reel to prevent damage during shipping. Inspect the line for any abrasions, especially near the Knot and Release Mechanism w/ Pin. Replace the line and secure the knot with a minimum 5 cm long tail. Secure the end of the towline to a solid object aboard. This will prevent accidental loss of sampler. Inspect and secure Retainer Ring to prevent loss of weights during deployment. Inspect and secure Upper Hose Clamps on Rubber Boot to prevent loss of Gravity Weights and/or Core Barrel during deployment. “NO” is a written reminder that means…DO NOT LOOSEN!

(PREPARING THE CORER FOR DEPLOYMENT) Loosen the Lower Hose Clamps. “YES” is a written reminder that means…OK to LOOSEN! Slide the Core Barrel onto the head until it stops. Use 5/16” screwdriver (included) to clamp the Rubber Boot to Core Barrel. Be sure to double check that all Hose Clamps (4 each x Upper and Lower) are secured very tightly. If not, you may lose the barrel or fail to collect a complete sample. A perfect seal (partial vacuum) is required to hold the sample in the barrel during retrieval. Arm the sampler in the “open” position pulling upwards on the Rubber Ball and hook Lanyard on Release Mechanism Pin. The sampler is ready for deployment.

(DEPLOYING THE CORER) Generally speaking…coring is an art where quality samples are difficult to collect and extrude. Some researchers spend the better part of a career to collect a few “good cores”. Many site variables exist to complicate any coring operation: lake type (natural vs. man–made), substrate type (soft organic gytta to sands), patchy depositional zones, deep lake depths and platform drift… It requires considerable practice to collect good quality cores. Calm sampling conditions and a secure platform are important factors for collecting quality samples. Determine the depth of the mud-water interface. Mark the lowering line with section of tape or wire tie for future reference. Collecting a quality sample is a very gentle operation. Do not “Drop or Free Fall” the sampler. Lower the sampler to the mud-water interface. Then, allow the sampler to slowly core the sediment to the desired depth. Try to re-mark the line at the final sampling depth. This mark may help you determine how to deploy on successive attempts. Drop the messenger to actuate the ball to seal the core head. You do not have to throw the messenger downward to trip the Release Mechanism. Try to recover the sampler as quickly as possible without any jerking motion. Important point during final recovery… before the end of the Core Barrel breaks the air-water interface, you must plug the bottom of the barrel with either a Core Extruding Plug or Poly End Cap. Otherwise, you will lose the whole (or part) of the sample. With the plug in place, it is now safe to lift the corer on board. Before transporting, double cap Core Barrel with orange Poly End Caps. With the Core Extruding Plug in place, the sample is prepared for the extruding process. If you overdrive the sampler into the mud, the rubber ball may become fouled with not hold a seal. Try to deploy the sampler again at a shallower depth.

(TROUBLE SHOOTING) If you fail to collect a sample the first thing to do is check the seal of the Rubber Ball. Completely immerse the sampler in shallow water and actuate the sampler to closed position. Next, lift the sampler into the air without the end of the Core Barrel breaking the air-water interface. The core barrel should hold the water column intact without leaking. If the corer is not holding the full column, you may have a leak in the Rubber Ball seal. The Latex tubing pulling downward on the ball can be easily adjusted. Remove the Lanyard Loop and pull the latex tubing though the ball to expose the “stopper”. Next, use a screwdriver to push the “stopper” inwards, thus to shorten the length of the latex tubing and increase tension on the Rubber Ball.. Re-install the Lanyard and test the seal again.

This website uses cookies to improve your experience while you navigate through the website. Out of these cookies, the cookies that are categorized as necessary are stored on your browser as they are essential for the working of basic functionalities of the website. We also use third-party cookies that help us analyze and understand how you use this website. These cookies will be stored in your browser only with your consent. You also have the option to opt-out of these cookies. But opting out of some of these cookies may have an effect on your browsing experience.
Necessary Always Enabled
Necessary cookies are absolutely essential for the website to function properly. This category only includes cookies that ensures basic functionalities and security features of the website. These cookies do not store any personal information.
Non-necessary
Any cookies that may not be particularly necessary for the website to function and is used specifically to collect user personal data via analytics, ads, other embedded contents are termed as non-necessary cookies. It is mandatory to procure user consent prior to running these cookies on your website.
SAVE & ACCEPT